More
JesuitRoundup.org is brought to you by:
Home Featured Confederate Statues: Falling Down the Memory Hole 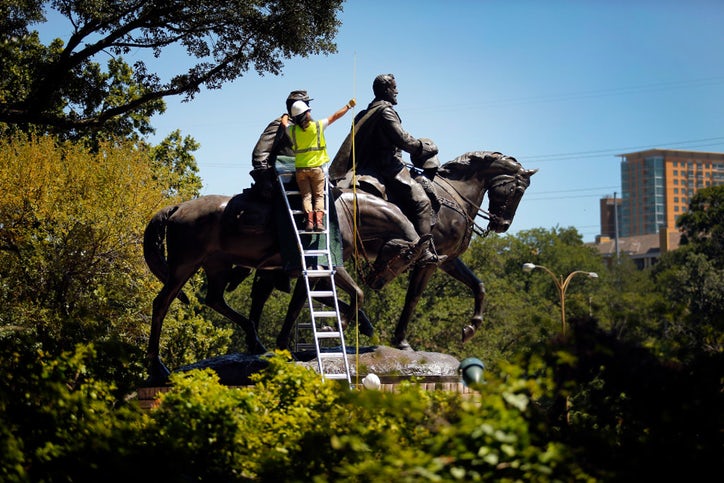 Trump’s Presidency: A Review of the First 100 Days

Health Care and the Job of the State

“When one knew that any document was due for destruction, or even when one saw a scrap of waste paper lying about, it was an automatic action to lift the flap of the nearest memory hole and drop it in, whereupon it would be whirled away on a current of warm air to the enormous furnaces which were hidden somewhere in the recesses of the building” (Excerpt from George Orwell’s 1984).

Perhaps not exactly there yet, the United States has certainly glanced in the direction of the dystopian world of despotic rulers and their tactics–Thought Police, “proper language,” destruction of the past in the name of “progress”–that make up the pages of Orwell’s novel, 1984. But recent events, such as historical monument removal and the proliferation of speech codes on college campuses have nudged us closer to this chilling reality.

Fellow writer Jack Madden ’19 has written an article advocating the removal of Confederate statues and putting them in museums. Arguing that the “Confederate iconography” exists as a symbol of hatred and oppression that “whitewashes the atrocities of slavery,” Madden misses three keys points.

Contrary to popular belief, these statues were not built after the Civil War. Instead, a majority of them were built during the Jim Crow era in response to the Civil Rights Movement (See chart below).

Historical inaccuracies aside, Madden provides a chart describing the history of when statues were built, highlighting the construction of those during the Jim Crow era.

However, Madden doesn’t even mention the over 55 statues constructed since the civil rights movement made tremendous strides, the 20 that were constructed between 1990-2008, or the 10 that went up during Obama’s presidency, all listed on the chart he uses. This is simply because there is no explanation for those. Why are people now calling for Confederate statues to be removed but silent when 10 went up under Obama?

His focus (and the only time period that supports his case) is between 1915-1970, but over 205 were erected before and after that period of racism. What was the motive for those, and who decides which ones are racist, and on what qualifications?

I want you to think from the perspective of an African American parent trying to explain to his child who Robert E. Lee is and why there is a statue of him in the park. Can you honestly come up with a convincing explanation that’s positive?

Yes. I would explain that Robert E. Lee was the general of the Confederate Army during the Civil War. I would say to the child that he/she should be proud of the equality the United States has today which hasn’t reached all parts of the world yet. I would emphasize that the statue represents a critical piece of our nation’s history that shouldn’t be forgotten and that will never be repeated because all citizens are equal.

“The center of this debate revolves around the question of what the Civil War was actually about.”

It should be noted that the Civil War was largely about the right for States to govern themselves at the local level without government intervention and for equal representation of both Northern and Southern states (slavery was a large issue, not the only one).

There was a massive cultural, economic, and ideological divide between the North and South. Cotton, the main export in the South was becoming less and less valuable. Consequently, because the South had a one-crop economy, they were economically weaker in comparison to the blossoming Northern economy, contributing to the cultural and economic divide. Also, higher tariffs in the South for trade and fewer railroads meant higher prices and less trade for Southern states, another nail in the coffin of the Southern economy.

Lastly, one of the most important issues were the “free-soil” politicians in Congress who wanted to make any new state that entered the Union a free state. This was a problem for Southern states because more free states meant more free state representation in the Senate and the House, effectively limiting the power and representation of Southern states which, as noted earlier, meant economic instability and no say in new legislation that could benefit the North, but doom the South.

So why should we remove statues that remember historical figures fighting for land, representation, and economic recovery and put them in museums, when there is nothing wrong with their current location and their presence is not undisputably racist?

By moving the statues to museums, we would take a step in the direction of complete removal, hanging them over the edge of the memory hole. Furthermore, is the access to these statues the same in a museum as it is on a street corner? Of course not. Who is to say where the museum director places it, potentially in the recesses of the building hidden away from public sight?

The argument boils down to whether or not the statues are unequivocally racist, and Madden maintains this is  uncontestable.

I conclude with three points:

1. Even if the statues are racist, there is some value in a reminder of a past, vile or not. We should remember our history but move past it. We should recognize past mistakes, but we cannot erase our history.

2. We should not remove Confederate statues and toss them down the memory hole, or put them in museums where access is not the same and museum directors can hide them away. If we do that, then what next to go?

3. What if the statues are racist to some, but a historical reminder for others? As a society, it is dangerous and unrealistic to shield ourselves from anything anyone could potentially find offensive or uncomfortable. We find instances of this sentiment in college speech codes, violent protests against campus speakers, and the advocacy of safe spaces–all joined now with the surge in quickly removing Confederate statues/memorials.

Be sure to check back into The Roundup for my next political article!

Do you have an opinion? If so, send an email to Dr. Degen (mdegen@jesuitcp.org) to ask for login information and start writing! Don’t want to write anything unless you have to, but still have an opinion? Contact Reid Allison (18005@jcpstudents.org) to join the Jesuit Political Society which meets every Wednesday during 6th period.