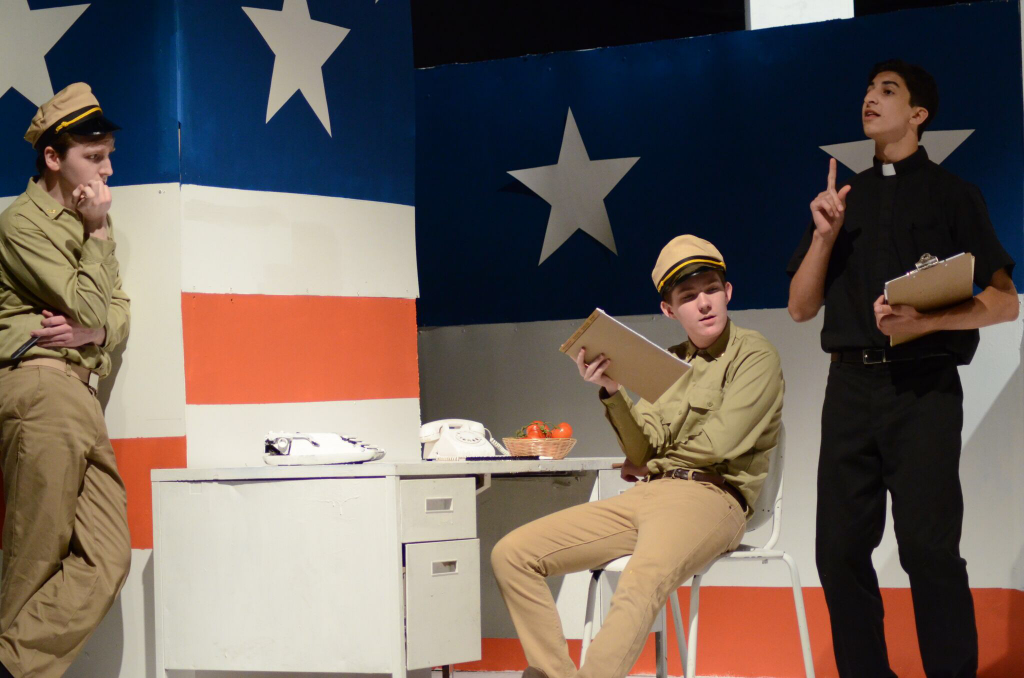 On. Off. On. Off. The flickering lights of the theater rapidly switch on and off, repeatedly shedding light on the intricate American Flag-painted stage before replacing it with darkness. Familiar to many, the flashing lights alert the audience to silence their phones, to sit quietly, and enjoy the next hour and a half of the Jesuit Theater’s spring performance.

On the weekends of April 21, 22 as well as 28 and 29, Jesuit theater performed their annual spring comedy, this year choosing the historic Catch 22. Written and staged at a WWII American military camp on a remote island west of Italy, this American satire was written to not only provide a laugh for the audience, but also covertly critic the problems and malpractices of war. “Mr. Patterson chose Catch-22 because he wanted to do something different… With Catch-22, we’re still doing a comedy, but it’s a lot more abstract, and the scope of what it does is a lot broader,” says cast member Kieran Taylor ‘17, “It was great to go in a different direction for this show and try a different flavor of comedy.” Performer Josh Betanzos ’18 reciprocates the uniqueness of this play, saying “Catch 22 has not historically been put on very often [by Jesuit] … Patterson wanted to challenge the group.” Since auditions for the play back in January, the group has been working tirelessly through 4-5 day practices a week, all leading up to make their performance shine. 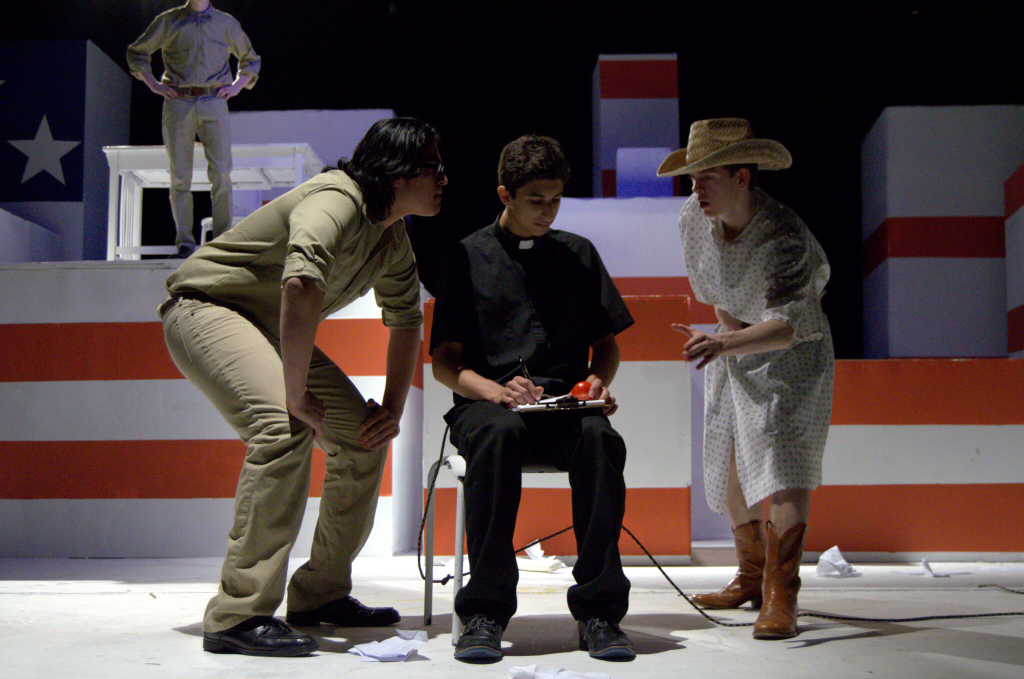 And shine the performance did, as Jesuit Theater walked on stageand put on a show to remember. “I loved it! The individual scenes were all very funny, and there was a variety of characters,” commented theater-fanatic Connor Thomas ‘18. “The show overall went really well with little to no mistakes, and I think people really enjoyed it,” reflects cast member William Fynes ‘18.

Jesuit Theater has several events throughout the year, such as the Fall Drama, Senior One-Acts, Spring Comedy, as well as the Film Festival, which provides interested students with several outlets to fulfill their theatrical passion.

Taylor explained, “The main reason I do theater is because it is so different from anything else out there. When I’m on stage I’m a different person. Me and my fellow actors are telling the audience a story live and in person every single night. It’s all very fluid – if a mistake happens, we go with it. Theater is a form of art, and it’s one I love to be a part of.”

Betanzos echoed Kieran’s sentiments, saying, “I was drawn to theater because several of my friends had been doing theater and all of them had great things to say about it. Mr. Myers and Mr. Patterson are great directors and people to learn acting from, and they made the process of getting acclimated to the production much easier and made the whole production more fun… I hope that more great productions will come out, and I see great talent in the underclassmen grade levels so that is promising for Jesuit Theater.”  Fellow junior Fynes agreed by saying, “Personally, I enjoy performing and being in front of a crowd, I’m a little bit of an attention [lover].”

All in all, it looks like yet another amazing performance for the Jesuit Theater, and lookout for the upcoming Jesuit Film Festival on May 12th!