More
JesuitRoundup.org is brought to you by:
Home Profiles Faculty & Staff Bucking a Trend: The Father as the Single Source of Income 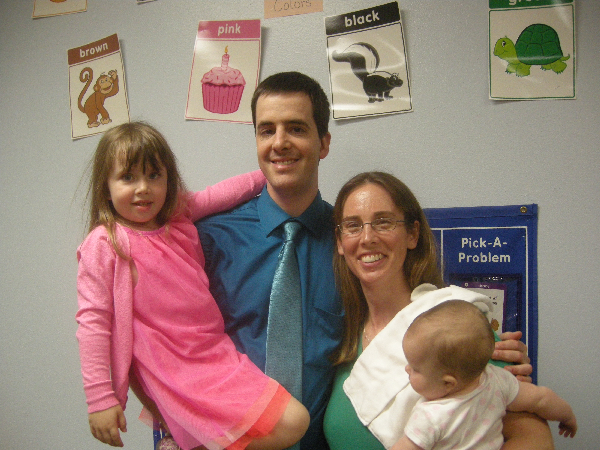 At Jesuit, diversity is something that students and faculty cherish. Oftentimes diversity is thought of strictly in a racial or ethnic light, when there are many facets to what exactly makes Jesuit a diverse place. One of those elements is family composition and whether it is a single working parent, two working parents, divorced, or separated, the way that families are made up changes a lot about students’ lives. The same goes for Jesuit faculty, and these five male members – biology teacher Dr. Todd Gruninger, math teacher Mr. Joe Nava, assistant principal Mr. Ben Kirby, and basketball coaches Chris Hill and Jonathan Alexander – all have the experience of being the sole source of income in their household while their wives take care of the home.

These men certainly are bucking a trend.  According to the US Department of Labor’s Bureau of Labor Statistics for 2012, in married-couple households with children under 18 years of age, the father is the single source of income in only 30.8 percent of such households.   Fifty years ago that percentage would have been over twice that amount, with the percentage of fathers as a single source of income being well over 60 percent of such households. ( 2011 University of Virginia study)

Especially on a teacher’s salary, this arrangement can be very difficult and the nature of such domestic composition is sacrifice. It could be time, energy, or obviously money, but regardless, each of these faculty members has had to adjust their lifestyle as their wives exited the workforce to give their undivided attention to their children.

For Mr. Nava, the question is, as he puts it, “What do you really need?” and he feels that all of his needs are met. “It takes sacrifice,” he adds, “but it’s really asking how is it we want to spend our time and how do we want to spend our money and looking at it that way it’s really a quality of life thing.” He emphasizes how much his wife enjoys being at home with their baby and that what they lost financially when she stopped teaching at St. Monica, they most certainly do not miss because of the new found time and energy they can devote to their child. “She is doing what she wants to do, which is great and fortunate,” he says. Furthermore, Mr. Nava and his wife lived on a single income for a time at the beginning of their marriage, so where they are now is not uncharted territory. However with a child now in the picture, many new challenges arise and even though Nava is still in what he calls the “honeymoon phase,” he knows that “in about six months” he will begin to face all of the financial challenges that a growing family presents.

Dr. Gruninger has had a similar experience, having his family’s income cut almost in half when he and his wife decided they wanted to have a family, a decision influenced by their own mothers, who created “a positive environment that both sets of our parents modeled for us.”  Parenting for the young Gruninger couple has been an aspiration for many years and they knew one of them would stay home with the kids.  “Wendi happened to win that job,” Dr. Gruninger added.  Despite the shift in “our priorities and our lifestyles”–like the cars they drive or don’t, the size of their house, types of family vacations–the couple feels that for them, this has been the best choice for their family.  “Wendi felt her calling was to stay at home and she feels fulfilled serving this role in our family.”  Clearly their choice is not the best for every family, but, as Dr. Gruninger noted, “In our case, we felt this was the best way we could both be supportive of each other and our shared goals.”  In fact, he added, “We feel that this was the best situation for our family and I am greatly appreciative that I am in a community at Jesuit that is very supportive of this.”

Mr. Kirby feels the same way, that there is not essentially a better way for a family to work but rather that for he and his wife the way they have been living is great for them. “I don’t know that we’ve made any sacrifices,” he says, “obviously every family has different decisions that they have to make based on their circumstances and whether it’s the husband that stays at home or the mother that stays at home or neither stay at home, I think all parents have to confront that decision.” For his circumstances, Kirby thinks that the arrangement has been ideal and “there have been decisions we have had to make, but nothing has been sacrificed.” He also stressed that even at Jesuit, there are so many great families with all types of different arrangements so, as he puts it, “I can’t say that our children are being raised better or worse than those families, it’s just a different arrangement and I think it’s a hard topic because the assumption is that families who decide to make this decision place more value on their children than those that don’t, while I would argue that there isn’t any difference.”

Finally, Coach Hill and Coach Alexander offer their insights as to what living this kind of lifestyle is like. “There’s positives and negatives to it obviously,” Alexander says, “It’s nice to have double income but its also great to have a parent at home.” This duality is something that he and his wife have had to deal with, “but the kids definitely get undivided attention with one of us being home and that’s a huge benefit. I love seeing the kids when I get home but I’ve had it easy getting to be here.” Coach Hill agrees, as he and his wife had double income before having a child and then “went down in income and gained a human,” as Hill wittily puts it. “The biggest difference is that there is a little bit more urgency from me to do more in the summer to get some supplemental income. So camps become a little more important and individual workouts for the team, anything I can do that is meaningful to me but also helps provide for the family picks up.”

And, of course, those moms working at Jesuit equally love their families too–their voices will be the focus of my next article on the family.