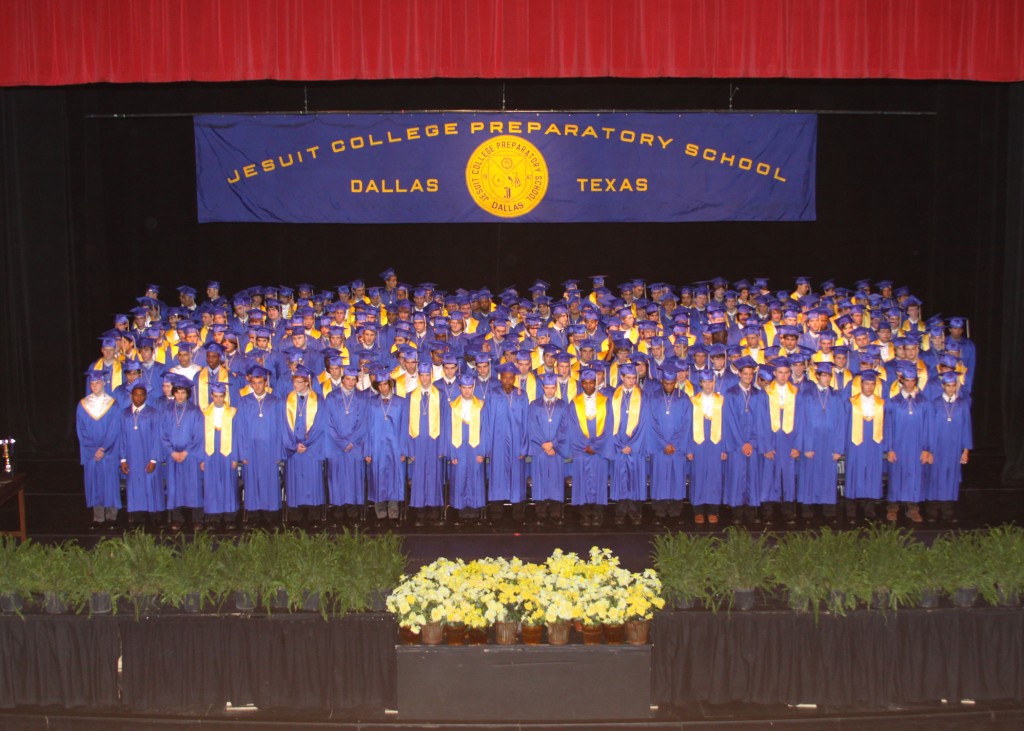 It seems like only yesterday that the seniors were pinning on their freshman nametags, donning  khaki pants, and walking wide-eyed down the hallways of a very unfamiliar place. Now, four years later, the class prepares to graduate with a sense of unity and friendship developed over the course of a Jesuit career.  What started as a scrawny, screechy group of little boys has grown into a team of built, classy young men. But graduating from Jesuit Dallas isn’t like graduating from  any other high school. It comes with a little “pomp and circumstance.”

For one thing, one special guest attends the Jesuit graduation who doesn’t go around to all of the graduations in the area: the Bishop of the Diocese of Dallas. Bishop Farrell or one of his auxiliary bishops will attend the ceremony.

Also, in contrast to the usual variety of speeches and talks given at graduation, Jesuit graduation features only one speaker, “a student elected by the faculty as most representative of the school,” says Senior Counselor David Oglesby.

Instead of presenting lists of awards to the graduating class as is done at convocation, only 9 awards are given, including the traditional valedictorian and salutatorian, Jesuit’s Men for Others awards, and some other, new awards presented.

And here’s maybe the most remarkable and impressive Jesuit feat: “We aim to finish the entire ceremony in 90 minutes,” says Mr. Oglesby. Avoiding the long, drawn out list of names and personal biographies, Jesuit focuses on the importance of the day, not announcing the school each graduate will attend next year or any honors or awards he may have received during his time at Jesuit.

The goal of all of these unique takes on the graduation ceremony is to “not only celebrate the graduate, but the teachers and parents that got him to where he is,” says Mr. Oglesby, a culmination of the entire Jesuit community.

The ceremony can be described by the title of the song that is played, “Pomp and Circumstance,” which gets to the heart of the Jesuit graduation. The ceremony includes a little pomp—the cap and gown, the rings, the formalities and rituals that go along with graduating from high school—and circumstance—the end of twelve years of schooling and the start of young adulthood as students leave the shelter of their parents and step into a bigger world.

So as the Class of 2011 prepares to walk across the stage, they do so surrounded by what it means to graduate from a special place like Jesuit. Senior Jake Gibbons says “Graduating from Jesuit is unique because of the extraordinary sense of camaraderie between the graduates, a brotherhood distinct from that of all other high schools.”

Others reflect more on their time at Jesuit before graduation. “I can honestly say that my four years at Jesuit have been the best four years of my life,” says senior Josh Vander Heiden. “With graduation approaching, it is sad knowing that I am going to be leaving Jesuit and all of my friends, but I know that Jesuit has prepared me to succeed in the future.”

Senior Alex Drews agrees. “Graduation from Jesuit means that you have become a man. Graduating makes me anxious about the future but also excited to start another chapter of my life.”

Though the class members of 2011 will extend past 12345 Inwood Road to span the country next year, they will always have a home at Jesuit, and their brotherhood, formed over the past four years, will last a lifetime. Josh Vander Heiden surely speaks for the entire group when he notes, “Jesuit will always remain a huge part of my life.”