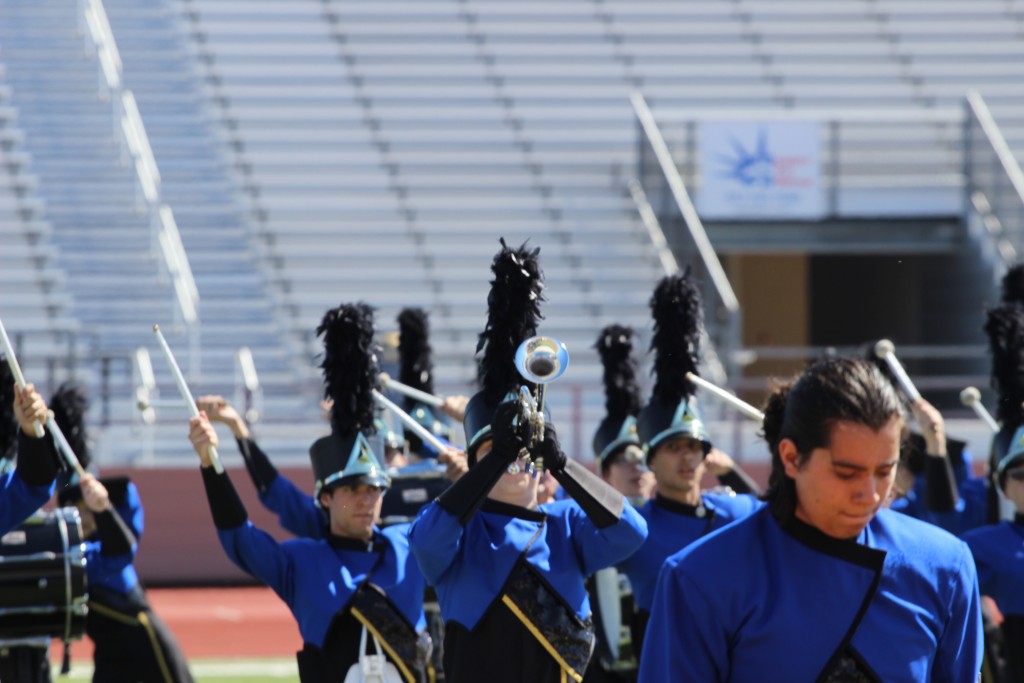 Tap, tap, tap. Reverberating across the field, the beat of the drum echoes throughout the entire ensemble, their feet imitating the staccato pulses. Each student intently focused on staying in form, keeping their upper bodies as still as a statue while their lower bodies move in sequence. From their first rehearsal 3 months ago, to their most recent rehearsal that morning, it has all lead up to this moment.

Such was the scene on October 8th as the Jesuit-Ursuline Ranger Band (JURB) marched on the field for their first marching competition. Every year the Jesuit-Ursuline Ranger Band participates in 2 marching competitions, the first being Little Elm’s Classic on the Lake, a fundraiser for the Little Elm Band. The Classic on the Lake is an annual marching competition with public and private school bands from all over the Dallas metroplex, each band receiving a rank based on their division as well as constructional comments from professional judges.

After competing in the Little Elm Classic on the Lake, the Jesuit-Ursuline Ranger Band then takes on the TPSMEA (Texas Private School Music Educators Association) marching competition, where private schools from all over Texas compete for the gold. This year, the competition was held on the 29th of October, the timing just barely scraping the edges of homecoming later that night. 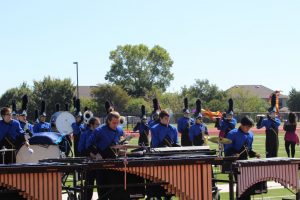 For these competitions, as with every year, the Jesuit-Ursuline Ranger Band takes on a new performance, guiding the listener through an extraordinary musical itinerary as well as producing visuals on theme; this year, it’s Queen. JURB Director Zane Crownover articulates that the directors “have been dreaming about doing a Queen show for awhile,” but after complications with copyrights JURB has been unable to play Queen music until this year. After getting the rights, the directors were faced yet another large problem: What songs, out of Queen’s astounding catalog of musical masterpieces, does JURB play? “There’s so many great numbers that we could’ve had with the show, but, when we’ve only got a total of 8 minutes to perform, we’re only going to fit in so many great classics,” says Crownover. In the end, the final decisions were made for JURB to play renditions of We Will Rock You, Don’t Stop Me Now, and Bohemian Rhapsody. Martin Flores ‘17, one of the drum majors of JURB, expresses his thoughts on the show; “The thing about our show compared to [other bands] is a big band’s show is [usually themed] ‘motion,’ or ‘water,’ something just very ambiguous and vague, but we get to do ‘Queen.’”

After taking their show to the big leagues of Little Elm, JURB not only received a standing ovation from other bands but also, more importantly, reviews from professional marching judges on their show, and advice on what they could do differently. “It’s a strategic move because we can take those constructive comments that they gave us and [implement] … before TPSMEA, and hopefully get us another superior rating,” explains Flores ‘17. Little Elm’s performance is especially enthralling since it’s the first time the band performs in front of a completely silent audience prepared just to listen to them, along with the judges watching their every moves. After performing at Little Elm, JURB was able to confidently return with their heads held high, receiving 3rd place in their division. On reflecting on the performance, Drummer Aidan Miano ‘17 recounts “Overall, I think that we sounded really really good, and I was really proud of how we all did.” But, after it’s all been played and marched, Little Elm comes down to the critiques received from the judges to prepare JURB for TPSMEA, and prepare they did. 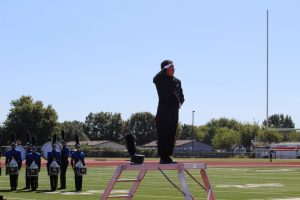 After using the weeks following Little Elm to rework marching techniques and address each comment from the judges, JURB became ready to take on TPSMEA. “We do [TPSMEA] to gauge our success” describes Miano ‘17, “this is like the final checkpoint of the season, like the championship game for Band. It’s the time to see how well we’ve practiced, how much effort we’ve put in, and see the fruit of our labor.”

Jesuit Ursuline Ranger Band marched a spectacular performance at TPSMEA, which was reflected in their awards. In terms of judging, the bands receive two forms of feedback, both a rank according to other bands in their division, and the possibility of earning up to 6 caption awards, which, independent from the ranking, award bands that have the best percussion, winds, marching, drum majors, color guard, and musical effect. And receive fruits the Band did, as the Jesuit-Ursuline Ranger Band proudly walked away with 4 out of the 6 caption awards, receiving best percussion, best winds, best drum majors, and best marching, as well as placing 2nd in their division.

Although every award was significant in the competition, most appreciated by Crownover was the marching award, saying “Getting the marching award, that’s a big deal…  That comes down to individual level of everybody stepping their game up.”  Likewise, Miano ‘17 specifically boasted of their performance in earning those awards, recollecting that “We reached our benchmark, and we surpassed it. That’s the most JURB has ever taken home. The show had a lot of intensity, and it literally sent shivers down [the audience’s] spines. People in the audience were moved… and that was what the directors envisioned as the ideal Queen show.”

By the end of the day, in returning home from 2 marching competitions with 3rd and 2nd place rankings under their belts and several trophies at hand, it’s pretty clear that JURB really does rock!