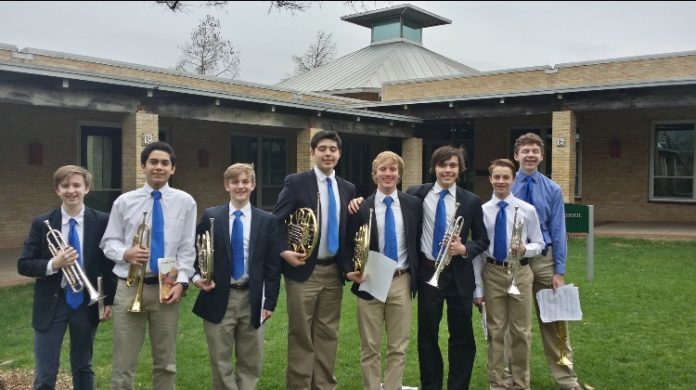 Members of the Jesuit Ursuline Ranger Band, referred to as JURB by some, spent the past months and countless hours preparing and perfecting their performances for the Solo and Ensemble Contest in early March.

The all-day contest took place on March 4 at Greenhill. Talented musicians from a variety of schools participated in the contest, playing either a solo piece or choosing to participate in a group ensemble. Musicians from the Jesuit Ursuline Band started preparing for this contest in the beginning of December, many of them taking lessons and practicing their piece weekly with their teacher.

While many of Jesuit and Ursuline’s participants chose to play solo pieces, three ensembles from the band decided work together and practice consistently in anticipation for the upcoming contest. Bass Stewart’17, an active member of the band since his freshman year, played with a high brass ensemble consisting of trumpets and French horns. The ensemble played a Star Wars composition composed by Zane Crownover, one of the band directors at Jesuit.

Stewart contributed to the ensemble as a French horn player. When asked about the group’s confidence in their performance, Stewart said “we were satisfied with how we did in general,” but the ensemble felt “a little less impressed with some of our individual parts,” reminding them that no musician is perfect. Overall, the ensemble earned a Division 1 Superior Rating, the highest honor possible in this particular contest.

Another JURB ensemble that participated in the competition was the percussion ensemble. The group performed a piece entitled ‘Teamwork’ and practiced every single morning for weeks. The ensemble consisted of many different instruments including bass drums, marimbas, and chimes.

Jaibin Matthew ’19 contributed to ensemble by playing the snare drum. Matthew said he is pleased with the ensemble’s Division 1 Superior Rating, and “the judges gave helpful feedback and [he] can’t wait to improve for next year.”

The 3rd ensemble to participate in the solo and ensemble contest was the clarinet ensemble, featuring several talented Bb, Eb, and bass clarinet players. The group played an original piece composed by Mozart called Eine Kleine Nachtmusik, adjusted for a clarinet ensemble. Headed by soloist Zach Watts ’17, the ensemble practiced rigorously in preparation for the meet, and received a well-deserved Division 1 Superior Rating as well.

Along with the ensembles that competed for a superior rating at the competition were the soloists. Many of the solos were meant to be accompanied by a piano part, but in an unfortunate turn of events the accompanist was sick, making the solos truly solos.

Among the soloists was sophomore Noble Allen. Allen, who has been playing tuba for 5 years, performed Per Questa Bella Mano, which was originally composed by Mozart for string bass. When asked about his feelings on his Superior Rated performance, Allen said “I did an amazing job, but there had to be something that I could have done better,” stating that the perfect musician does not exist.