More
JesuitRoundup.org is brought to you by:
Joan A Degen    Suzanne and Clark Durham    Carl & Theresa Motter
Arts A Conversation with Mr. Acevedo on Jesuit’s Rendition of Romeo and Juliet
Facebook
Twitter
Email
Print 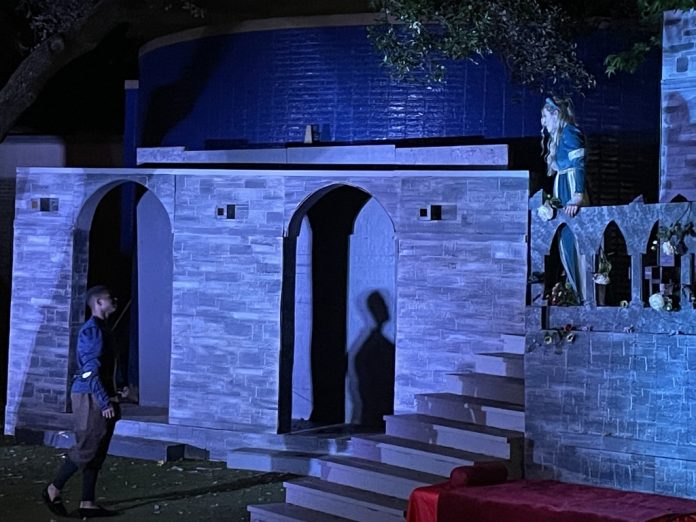 (*Note: The following article was written last May, but with some website issues it has not been published until now. However, hopefully, this will help students who are interested in theater to see what Jesuit’s stage and film process is like.)

With the oddities of the past year involving Covid, as well as the reconstruction of the theatre, Jesuit’s Stage and Film department had to perform outside. Within the senior courtyard, Acevedo and the cast members were able to do their own take on Shakespeare in the park.

Is this the first production in the senior courtyard?

Since like last two productions have been outside, what made this one different than the last one?

For several reasons, first of all, since the first time I was looking for outdoor spaces in the school, that was like my ideal… It was like the perfect one, just because of the beautiful surroundings, the trees, the enclosed space, even it is outdoors, but inside the school. It just provided a beautiful, perfect space for what I thought it was a Shakespeare play.
I mean, good helping others, but I thought it was perfect. Uh, so that’s the reason why I say that for Romeo and Juliet, instead of maybe doing one of the other shows that we did during the semester. So, we came up with the older spaces that we used before him and I saved the senior quarter for the checks per play, which I decided he was going to be roaming unit because I wanted to do Romeo and Juliet in the school for a while.

I have done Romeo and Juliet in the outdoors before in Puerto Rico. So I had the experience of how to stage that specific play outdoors. And it was just a beautiful experience. It was just perfect, same as I imagined it would be, you know, I use the big tree and… I built the set right by the tree, so I could use the three as part of the set and I had actors doing scenes from the tree and all that. So yeah, it just provided a perfect space for doing the Shakespeare Shakespeare in department outdoors. Hopefully, we can do it again because I have other ideas of doing tricks for a place in that same scenario. So hopefully we will get to do that again.

What was it like to choreograph the sword fights?

It was awesome. They loved it. It’s like playing. They really enjoyed that part. I didn’t have to do much directing. Once I showed them the choreograph they just went and practiced it themselves. Dancing is more difficult, but both take work and they had a lot of fun.

Just for any Jesuit play what is it like to work with two different casts?

We always do that. In all the productions we use double casts. It makes it more difficult because you have to do the same twice. If one can’t come the other needs. But now I’m used to it.

Stay tuned to The Roundup for more Stage & Film updates!