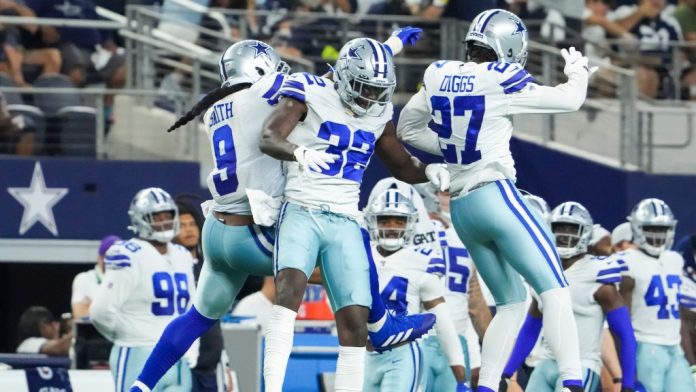 The beginning of the 2021-2022 football season has just begun. Our beloved Dallas Cowboys have blown the minds of the football world with astonishing progress these past 7 weeks. The big blue stars of Texas have been a very unsuccessful team in the National Football League for years, even decades. The last time the team won a Super Bowl was in 1996 against the Pittsburgh Steelers. The team has been on a downfall ever since the triplets consisting of the legendary Hall of Famers like Troy Aikman, Emmitt Smith, and Michael Irvin retired. The team’s football journey this season has been very surprising, so let’s take a look at how America’s team is taking over the football industry.

Here is a quick peek of the Dallas Cowboy’s solid season so far!

In the team’s first game of the season against the defending Super Bowl champs as well as their new quarterback Tom Brady, the lousy 6-10 Cowboys in their previous 2020 season showed no remorse against the top dawgs of the NFL and came up short by a surprising score of 31-29 Tampa Bay. This game gave the helpless Cowboys fans some hope that this year might be their year (which is very stereotypical for Cowboys fans). Considering this is Dak Prescott’s first game back since his devastating injury in week 5 last year against the New York Giants, the Mississippi State Quarterback put up an astounding total of 403 yards and three touchdowns following a severe injury. Other than a couple of missed field goals and a few turnovers, the Cowboys played decently well in most fans’ opinions in their first game of the 2021 season.

Coming off an 0-1 record, the Cowboys began their quest for their first dub of the season. The team standing in their way of that huge goal would be the LA Chargers. The 7-9 chargers from the 2020 season hosted America’s team – only to be pummeled early in the first quarter with a score of 14-3 Cowboys. Field goals were a key ingredient for the Chargers. Tristan Vizcaino drilled a field goal in each quarter, acting as the saving grace for the Chargers. However, it was not enough for the intense wrath of the Cowboys’ offense who effortlessly marched down the field to attempt field goal range for Greg “The Leg” Zuerlein who successfully booted a 56-yard field goal to seal the bag for the Cowboys first crucial win of the season.

Coming off as 1-1 in the season so far, the team finally had their first home game of the season back at At&t Stadium. The Cowboys host the depressing 4-10 Eagles from the previous season and prove their dominance by placing an astounding score of 41-21 to overcome Jalen Hurts and Philadelphia. The defense played outstanding with Trevon Diggs possessing the first pick-six for Dallas since 2017 and only allowing 21 points. The Cowboys later would go on to be 2-1.

The Cowboys continued to roll over their opponents one by one. Their next challenge would be the 5-11 Panthers led by Sam Darnold. The Cowboys started off strong with 13 points in the first half. The Panthers were not taking the Cowboys lightly with only a slim lead by one point going into the second half. Leading into the second half, the Cowboys put the pedal to the metal and exploded with 20 points in the 3rd quarter. The defense was led by none other than Trevon “The Don” Diggs recording two interceptions off Sam Darnold giving Diggs who scored a record of 5 interceptions in just 4 games. This incredible win improved the Cowboys to 3-1 and was also the Cowboy’s first win against the Panthers since 2012.

The rolling Cowboys continued their hot winning streak against their huge rivals. Unlike the previous season’s matchup between the two, Prescott thankfully did not receive an injury which last year absented him for the rest of the season off a brutal ankle injury. Instead, Daniel Jones, the quarterback, would be carted off with a severe concussion. The injury-plagued Giants would lose Saquon Barkley later in the game due to a gruesome ankle injury.

At the beginning of the game, Dak would throw an interception and cause a fumble but that wouldn’t stop Prescott from completing the contest with a 22 of 32 completion rate and 302 yards to seal the deal, and of course, we can’t forget about Trevon. “The Don” had another interception this contest leading the NFL for interceptions with an absurd amount of 6 picks in only 5 games. The game ended with a mastery over the Giants by a score of 44-20 which proceeded the Cowboys to 4-1.

Dak Prescott and Trevon Diggs continue to bless the Cowboys and their fans by winning 5 games in a row, which has surprised millions of NFL Fans around the Nation. They now take on the previous 7-9 New England Patriots led by Alabama quarterback Mac Jones who begins his rookie season in the NFL. Dallas had not won in New England since 1987 and has never won against Belichick. The Cowboys who are now 5-1, (five straight dubs) exceed their longest win streak since 2016. The game is super close up until the fourth quarter with a score of 17-14, Cowboys leading.

An exciting milestone occurred during this intense contest as Dak Prescott scored the 2,500th touchdown in franchise history by a 1-yard pass to CeeDee Lamb an Oklahoma Native in the third quarter. New England was clinging on pretty strong by a lead of 21-20 until; yep, you guessed it, Trevon Diggs intercepts Mac Jones and returns the ball for 42 yards for a touchdown to give the Cowboys some breathing room. The game eventually entered overtime and the Cowboys had to strike again once more. Prescott soon found a wide-open CeeDee Lamb and gracefully tossed the pigskin to the young player who waltzed into the endzone to hand the Patriots their fourth straight home loss of the season.

If the Cowboys winning 5 games in a row wasn’t enough to believe that they are the real deal, think twice because this will blow your mind. The Cowboys landed in Minneapolis for Week 8 against the previous 7-9 Minnesota Vikings to hope to improve to a six-game win streak. The incredible bout was easily favored in Minnesota’s direction considering that Dallas did not have their starting quarterback Dak Prescott after he suffered a calf injury on the last play of the game against New England.

It was a game-time decision on whether he would suit up or not, but Dallas’ decision-makers made the right call and handed the Cowboy’s offense to the fifth-year backup Cooper Rush. Rush’s first NFL game was an absolute statement victory by him passing for 325 yards and throwing 2 “tuh-dees” with the last being a 5-yard throw to Amari Cooper to screw the cork on the bottle for the Cowboys sixth victory in a row over a very decent playoff-worthy Minnesota team.

After watching the Cowboys pummel their opponents and continue off a non-expected win streak, Dallas fans gain hope that maybe, just maybe, that their team really is Dem Boyz this year.

Stay tuned to The Roundup for more NFL updates!