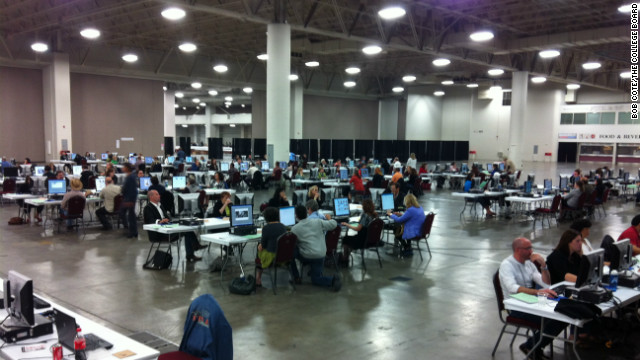 Many of us take AP tests in the Spring, but what we all worry about is studying for the test, and eventually taking it. However, we often ignore or take for granted what happens after we take the daunting test. Well, luckily, we have our very own AP grader here at Jesuit: Mr. Dondis. I recently interviewed him to get some information about what goes on behind the elusive curtain of the AP grading process.

What is the AP grading process, and how does it work?

To become a grader is a lot like getting any job: you have to send in a resume, they ask for references, and they want to talk to people that you’ve worked for before. If you get invited to do it, you aren’t necessarily guaranteed a spot the year you are accepted. I think I applied for the first time about four years ago, but then it took two years before they finally asked me to do it. I guess they get a lot of people that do it and they rotate them out over time.

The actual process happens over about a week: you fly in on a Friday and then it starts on Saturday morning. You sit in a huge convention center, the size of an airplane hanger, that’s partitioned into several smaller curtained-off areas and work from about 8:00 am to 5:00 pm for a solid seven days. You work at least eight hours a day and get lunch breaks. It’s kind of like a sweatshop for nerds. You’re in there at eight o’clock, sitting down at a desk, and you’re grading papers, then somebody comes through and tells you it’s time for your break, and then you come back. As for the logistics, you check into a hotel when you arrive and are assigned roommates. I’m pretty sure there are a couple thousand people in there.

I grade the AP Calculus test, and, on both calculus tests, AB and BC, there are six free-response questions, and these are the questions we grade. There are different tracks you get placed into. I’ve been in the BC track for the past couple of years, which means that I will either grade BC-only questions or questions that can appear on either the AB or BC tests. Generally, the way that it works is, you will be briefed on a question, which means they’ll sit you down in a room for about an hour and give you the possible things that might happen and how to react and grade in each situation. There are quite a few variables, so while you’re getting the hang of it, you can go to the table lead and they’ll figure out how to handle certain situations.

You generally work on this first problem for the whole first day, and about halfway through the second day you’ll stop working on that and move on to the second problem. If they do everything right, you only have to read three of the six problems over the course of the entire week. They’ll start you on one, you’ll do it for maybe a day, they’ll give you a second one and you’ll do it from start to finish until all of them are graded. Then they’ll give you a third problem and you’ll likely come back to the first one. They don’t want you to do it all, they want to figure out how long it’s going to take. This last one, they kind of counted wrong and made us brief on a fourth problem too, but we didn’t do the last one for very long.

That’s really all there is to it. After a while, you start to see the same things over and over again and it starts to move pretty quickly. They give you these big folders of twenty-five tests, and the first couple can take a pretty long time to get through, and after that, you just go and don’t realize you’re doing it. AP Calculus questions are graded out of 9 points, and I find myself counting on my fingers a lot, so by the end of the day, my hands are sore. Just like you’re taking the test, I’m sitting there with a multiple choice writing in the book number and the grade on that problem and then hand in the form.

There’s a lot of nerd talk, after hours, people will put some things together for exactly what you would expect – math and subjects on the other tests there. They’ll get together and play board games, have a Doctor Who watching, and stuff like that. I don’t participate in that stuff very much. For the past couple of years, because it’s been in Kansas City, I have some family there and I go and meet them after. It’s pretty draining and mentally exhausting.

What brought you to become an AP grader?

The reason I knew about it was from Mrs. Bean, an AP Statistics teacher from a few years ago, who used to talk about grading the AP Statistics test. It’s a nice thing to do, I think because it lets you bring the experience back to the students. I can be more deliberate in the things that I tell them like when they’re doing the test, watch out for these things that I would take points off for as a grader.

I did it for that reason because I think it’s good as an AP teacher to incorporate that experience into the class, and also because as a teacher I think it’s nice to add that piece of professional development. You really learn a lot about the way AP works and how the test works. You get to network with people who are doing the same thing at other schools.

During AP tests next semester, remember to think about the people reading your responses. Stay tuned to The Roundup for more information!