More
JesuitRoundup.org is brought to you by:
Home Series 09.11 9/11 Survivors and Family Share Experiences on 14th Anniversary 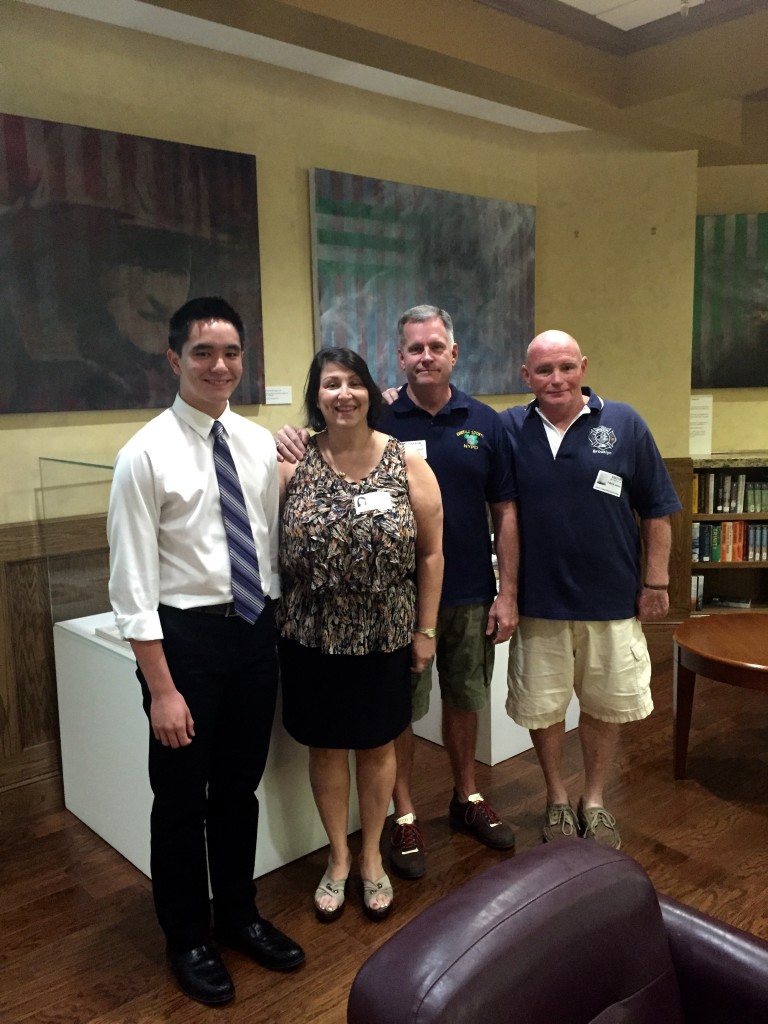 Blake DeLong ’16 understands the student viewpoint, too young to remember the attack with any clarity or vividness. This lack of a personal connection often leads to a sense of apathy towards the memorial, Blake admitted that “We can sometimes be desensitized to 9/11 especially from secondary and tertiary sources, but these were primary sources which carried a lot more weight and made it a lot more real.” Previous exhibitions only attracted attention when visited during a fine arts period, blending so thoroughly with the museum that the lines of distinction dissipated. The wretchedness and real world connections of Ground Zero 360 intensified after Friday’s breakout sessions, “the things you’re seeing in the halls, the things you’re seeing in the cases, you understand the hardship and the misery attached to it,” DeLong comments. Walking the halls everyday can often develop a familiarity with the surroundings, DeLong explaining “We spend so much of our time [at Jesuit] that when something changes, it’s a change we notice.” Rather than remaining casual bystanders to the 9/11 tragedy, the breakout sessions helped solidify these emotions with authenticity. The Ground Zero 360 experience visually transforms our daily school lives, but powerful stories akin to those entrusted with the Senior class breathe deeper meaning and provide understanding to an otherwise forgotten memory.

Patrick Jackson’s lifelong friend and brother-in-law Kevin O’Rourke died helping rescue trapped victims, a firefighter who traveled inordinate distances to volunteer his services that day. At first, Jackson hesitated to speak at venues such as Jesuit, “[battling] a lot emotionally with wanting to honor Kevin but not becoming involved with the show.” Previous openings occurred at venues teeming with hundreds of anxious attendees, the atmosphere preventing the deeper connections forged during intimate presentations. Jackson used to flock to dark secluded corners, hiding from the nerve-wracking memories coloring the experience. After presenting in more intimate settings, he finally “sees this as an enlightenment” and a positive step towards recovery, helping Jackson resolve the worry and pain felt for several week’s before his body’s eventual discovery. Paying tribute to such a warm and respectful audience is the best way for him to commemorate Kevin, the environment allowing Jackson to “talk to people at these presentations about things [he] couldn’t share with [his] own family because of the caring and love.” This opportunity to inspire future generations with his brother-in-law’s story helps the O’Rourke family heal and make peace with the terrible tragedy.

Much like Jackson, Former NYPD Chief Tom Mason spent 9/11 detached from the event in his precinct, powerless to tangibly assist despite his position of leadership. Mason’s protective instincts left him at the mercy of fate, “spending several hours wondering if [his wife Michele] was alive or dead.” Struggling to make it through his speech without breaking composure, Mr. Mason not only relived these hours of tension but also described the department’s reactionary resolutions. His experience leading the New York police lent a unique perspective of the administrative responses in the days following the attack. While the nation slowly recovered, the police precincts “absolutely changed the focus of what the NYPD does, [creating] thousands of jobs for counter terrorism unheard of before 9/11.” The FBI and municipal government likewise strengthened interdepartmental ties, using increased communication to develop and prevent future complacency. Despite these extensive efforts to increase awareness, Mason still worries time will fade away the significance of this horrific attack, condemning an event which so greatly impacted thousands to a forgotten point in history. Active commemoration remains critical in stemming this progression because “in what seems like the blink of an eye fourteen years have gone by,” and young people and remain engaged and attentive about the issue. His experience speaking to the seniors sharply contrasted others, a nine-year old neighbor in New York unable to answer what 9/11 actually was. Mason hopes future presentations and the expansion of the piece to even more locations will help pay homage with the same fervor for decades to come.

Michele Mason experienced firsthand the cataclysmic wreckage, working with eight police officers during the critical recovery hours after 9/11. Every year since she spent haunted by the memories of death and destruction, unable to find peace. Presenting to crowds like Jesuit helps ease that suffering, and in recent years this burden has been abated by “being with people who had been through the same experience.” Mrs. Mason shared an intimate moment of realization from ten days after the chaos, taking place amid the busy aisles of a supermarket. After assisting distraught and hysterical family members throughout the immediate aftermath, she felt a frantic hysteria observing the nonchalant, everyday atmosphere in the grocery. “Of course life has to go on, but I wasn’t ready for it ten days later,” she reflected. Exhibitions and presentations such as these help bring humanity and realism to the survivor’s sufferings, “when you see these pictures you can see the debris in the air it feels suffocating just watching it, when you see all the cops slumped over, you can physically feel that weight.” Mrs. Mason finally defined this hallowed day as the great divide in her life remarking “everything after 9/11 my life is forever changed. 9/11 is a part of my narrative.” Jesuit’s two-pronged tribute helps reconcile with this scarring event, taking a tale of suffering and transforming it into efficacy and future prevention.

Extending the school’s appreciation for these individuals’ hard work and efforts even further, Jesuit prepared a special commemoration at the Jesuit-Strake Jesuit football game coin toss. Throngs of onlookers silencing, the entire community united in celebration of duty and sacrifice devoted by so many victims and survivors. While far more somber than most pre-game rituals, the tribute reinforced the theme of remembrance and included current Dallas police and firemen as well as two school alumni. Two brilliant spotlights pierced the Dallas skyline afterwards, standing vigil throughout the night as a silent memorial to the entire city.

As the distance between September 11th, 2001 and the present widens, Americans shift to a state of detachment, the gripping emotions of the day fading into an obsolete memory. Within several days, most of us will forget the courage and sacrifice, returning like the shoppers in Mrs. Mason’s story to lives of blissful passivity. While letting go provides the path of least resistance, the survivors and family of 9/11 victims undergo hardships and endure losses daily. First responders and volunteers inhaled concrete rubble, jet fuel, asbestos, and a multitude of carcinogens while attempting to save lives, these respiratory poisons continuing to claim victims years later. Although most of the public officials receive supplemental health care to cover extensive maladies from 9/11, civilian volunteers have yet to receive any kind of treatment. October 2016 marks a terrifying month because the Zadroga Act, which covered all these individuals including police and firefighters, will expire and block hundreds from access to free healthcare. Responsibility lies with younger generations to stand up and champion this clearly justified cause. September 11th provides a day dedicated to remembrance, however we cannot be deluded into believing the fight is over. We must remember their sacrifices continue unabated to this day and help restore justice.

More Information about the Zadroga Act