More
JesuitRoundup.org is brought to you by:
Home Featured 2022 Jesuit Soccer Playoffs 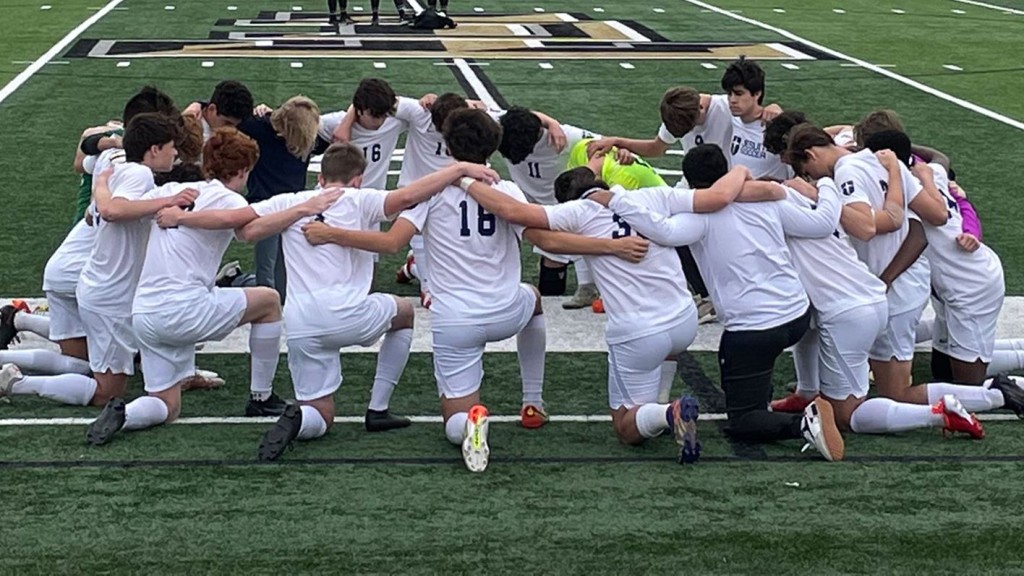 The 2022 season for Jesuit soccer has finished, after defeating the Arlington Martin Warriors in the Bi-District Round, a weather-botched game versus Lewisville ended the Rangers’ run for the Playoffs.

Bi-District Round vs Arlington Martin Warriors

Starting off quickly in the 8th minute, forward Josh Roppolo ‘23 scored from a Ranger throw-in, putting the Rangers up 1-0. The Warriors’ relentless offense reached goalkeeper Cole Hines ‘23, posing a 1-1 opportunity. Amazingly, Hines made back-to-back instinctive saves, denying Arlington a chance of scoring. The Rangers’ defense, including the powerhouses of Jack Fisher ‘22, Jack Crumley ‘22, and Matthew Sucato ‘24 withheld the Warriors up to the 50th minute when a freekick entering the penalty area and accurately finished, tying the game 1-1.

After a back and forth second half toward the end of the first overtime, the Warriors rocketed the ball off a rebound, but a crucial header save by Sophomore Matthew Sucato wasted their chance of taking the lead. In the last minutes of the game, each team created scoring possibilities, but even through the second overtime, no team scored.

Penalty kicks are next, let the fun begin!

The first Warrior player to shoot finished a well-placed strike past Cole Hines.(1-1)

Jack Bradshaw buried a second goal for the Rangers. (2-1)

Brendan Shorey continued the Ranger’s scoring streak, nailing it past the keeper. (3-1)

Jesuit Dallas secured the victory after Julian McDoniel defied the pressure, clutching the winning goal, sending the Rangers to the Area Round against the Lewisville Fighting Farmers. (4-1)

In the Area Round, The Rangers fought against the Lewisville Fighting Farmers who held an intimidating 15-5-4 record this season.

An uneventful game to say the least, the Rangers struggled to adapt to the strong winds to their backs in the first half. A necessary foul by Jack Fisher was made a quarter into the game, foiling the Farmer’s scoring opportunity. A few offensive attempts occurred from both teams, but each goalie withstood the shots, keeping the game 0-0 into the second half. The wind benefited Lewisville as it promoted their possession-based tactics which challenged the Rangers’ defense and limited our offensive strength.

In the second half, after resisting the Farmers’ barrage of shots, a ball threaded through the Rangers, and Farmer DJ Koulai ’23 scored with less than 3 minutes left in the second overtime.

The Rangers finished the game strong, working tirelessly until the end, but were unfortunately eliminated from the playoffs. Nevertheless, the boy’s commitment to excellence and friendships throughout the season are noticed and appreciated.

Stay tuned to The Roundup for more soccer news!