More
JesuitRoundup.org is brought to you by:
Home Clubs & Activities Robotics Robotics Club Traveling the Country 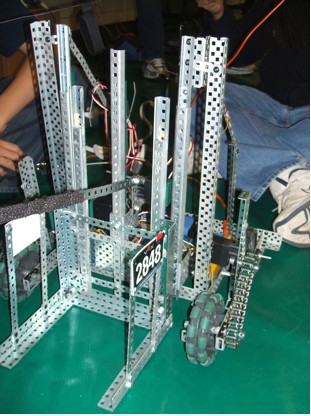 The Jesuit Robotics Club has been a part of the Jesuit tradition for three years now.  We travel as far as Atlanta, Georgia and San Antonio, Texas, to compete against high school students from around the world. 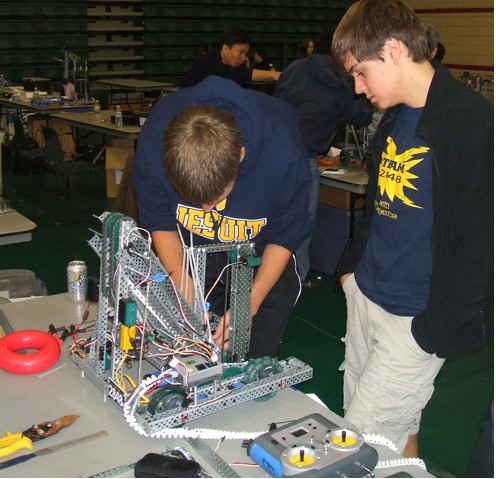 We make t-shirt cannons and help with Chariot-building at Ranger Day.  This year we are beginning a new tradition with the Santa Clara School as we help them start their first robotics team.  This year we are also making a free-throw shooting robot for basketball games.  On top of all this we participate in two regular competitions: VEX and FIRST.  Sophomore Jeff Barone says, “I like Jesuit robotics because I like to solve the problems that arise and then adapt them to make them work on the robot.”

During the first semester, we spend most of our time and effort on VEX robotics.  Jesuit sent one team to the VEX World Championships last year.  VEX is a worldwide competition of 18” by 18” by 18” robots that must be designed to do a specific task.  This year’s task involves putting 7” rings onto 9” pegs in a 12’ by 12’ playing field while two other robots try to do the same thing.  Jesuit sponsors two robots with two unique designs.

The first team, headed by Kyle Wolf and Nathan Alaniz, is a basic forklift driven by Peter-Michael Webb that lifts the rings like a forklift and drops them onto the posts. Freshman Kyle Wolf says, “I like our robot because it is a simple design and it works effectively and efficiently.” The other team, headed by Quinn Wolf and Ian McBride, has a more complicated “claw” lift system that is driven by Will Harris.  This robot has a double-jointed arm that “grabs” rings and lifts them to the posts.  Our first competition of the year was at the Dallas Sheraton in downtown Dallas.  Both teams made it to the competition but lost at the quarterfinal stage.  Jesuit was the only Dallas-area team to make it to the VEX World Championships last year and we hope to repeat that success.  In the most recent competition last Saturday at UTD, both robots performed very well, but losing some very close matches were unable to make the quarterfinal round.

The second semester is spent working primarily on FIRST robotics.  These robots are larger and more complex than 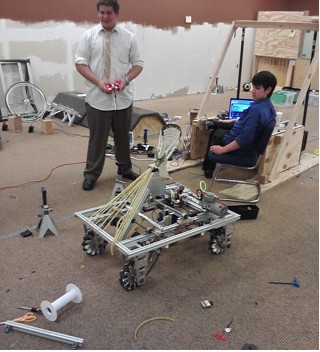 the VEX robots.  This year’s competition is announced at JC Penny at the beginning of January.  From then, each team has exactly six weeks to build their robot before it is shipped off to the competition site.  Our first FIRST competition this year will be in San Antonio in March.  Mr. Michael Couvillon, the club moderator, has high hopes for this year’s team and thinks they can make it back to nationals like they did in 2009.  Currently, the FIRST group is working on an automated free-throw shooter for basketball games.

We would like to thank our sponsors, JC Penny, PTC, and BURNS Controls for their continued support.  If you are interested in joining the fun and excitement of Jesuit Robotics, contact Mr. Couvillon in the math department or our President, Junior, Patrick Barone.