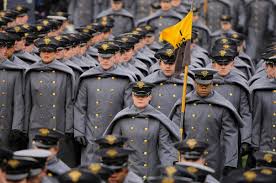 It is the best rivalry in college football. It doesn’t get any chippier, heartfelt, or passionate than the Army-Navy game. In fact, at one point, it is rumored that the game wasn’t played for several years because a general and an admiral got into a fight after a game. Over 100 years later, nothing has changed. It is raw aggression and hostility between the teams. However, the teams are united in their desire to serve the country. It has been said that it’s “the only game where everyone on the field is willing to die for everyone who’s watching.” On Saturday, December 11, Army and Navy faced off for the 122nd time. In East Rutherford, New Jersey, the teams battled each other at MetLife Stadium, home of the New York Giants. 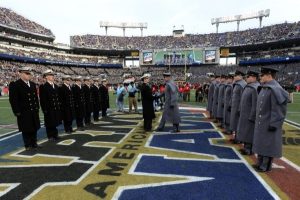 Tradition:
With over 120 games played against one another, tradition is the biggest part of the Army Navy game. On the first day at either West Point or the Naval Academy, the first thing that any young officer in training learns is to “beat Navy” or “beat Army.” With both schools so close in ideology, the schools have very similar Alma Maters that are sung at the end of the game. The loser sings theirs first, and the winner follows with their own. Thus, the phrase “sing second” is also used as a phrase at both academies, which signifies the importance of triumph. In the storied history of the rivalry, Navy has won 54 games, Army has won 53, and they have tied 7 times.

Uniforms:
Perhaps the best part of the game happened months before kickoff. Every year, Nike and Under Armour design uniforms for Army and Navy, respectively. The designs will honor distinctive units and moments in American military history. Since the creation of this tradition, it has been a competition to create the “better” uniform for the game.

This year, Army decided to honor the soldiers of the Army Special Forces, also known as the “green berets.” In the weeks following the events of September 11th, 2001, these green berets deployed to defend American freedom. The Army uniform is steeped in representative significance. The helmet crown has the numbers “91101” accentuated to honor those who died on September 11th, 2001. The front of the jersey also says “De oppresso liber,” which is the motto of the Army Special Forces meaning to “free the oppressed.” The color scheme of the uniform, beige and camo, is designed to replicate the uniform of those who fought in the early days of the war on terror.

Navy decided to pay tribute to the Superhornet Fighter Jet, which is one of the most commissioned planes in Navy history. Each helmet is handcrafted, and each one took over 3 hours to create. On one side is an F-18 Super Hornet, and on the other side is the US aviation Roundel. The crown of the helmet says “Fly Navy,” once again paying tribute to the fighter pilots of the US Navy. The team honored Commander Brian Bourgeois who died in a training accident last week with a patch of his unit, SEAL team 8. 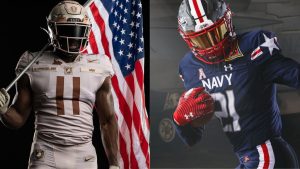 The Game:
In a sense, the Army Navy game is a bit monotonous. Both teams disproportionately run the ball, more so than any other teams in college football. Army was the favorite going into the game with an 8-3 record, while Navy had a 3-8 record. This made Navy a big-time underdog. The game started off with an Army touchdown in the first two minutes of the game. Everyone watching the game thought that Navy was doomed. At halftime, the black knights of Army led 13-7. In the 2020 Army Navy game, Army dominated with a 15-0 win over the midshipmen. Wanting to turn the tide of the rivalry, Navy came out of the locker room at halftime ready to play. In true American spirit, neither team considered themselves out of the fight until the clock read 0:00. Battling back and forth with little favor to either team the whole game, Navy managed to beat the odds and win 17-13. The final blow to Army’s chances was a stopped first down by Navy’s #54, Diego Fagot, who tackled Army’s quarterback about one yard short of the first down marker.

Jesuit Presence:
Many Jesuit graduates go on to become cadets and midshipmen at West Point and the Naval Academy. 2021 Graduates Marshall Neri (left) and Shane Hatzmann (right) attended their first Army-Navy game on Saturday. This will be one of their fondest memories as they move towards becoming officers in the Army and Navy. 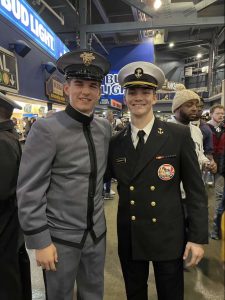 In the coming years, nothing about the Army Navy game will change. It will always be a heartfelt battle to the end of the game, there will always be spectacular uniforms, and both teams will probably run the ball for most of the game. On December 10th, 2022, the teams will battle once again.